On November 11, we remember the sacrifices of those men and women who went to war so that we could have the freedoms we have today.

A historian noted that over the past 3400 hundred years, there had been peace for only 268 of them.  Wars often begin with one group of people wanting to take away or restrict the freedom of another. No one enjoys having their freedom curtailed and the pursuit of freedom often has led to conflict. There is evilness at the root of these conflicts, and many have paid a heavy price in the pursuit of peace. 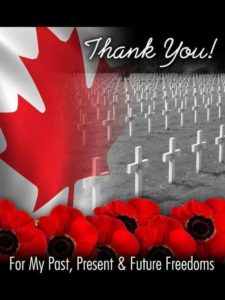 On Monday, we remember that cost: in WW I – 7 Million civilians and 10 million military personnel killed and an additional 20 million injured; in WWII – 50 million civilians and 21 million military – 3% of the world population. We remember the Canadian men and women who have lost their lives in what was in defence of our freedom; since confederation approximately 111,000 Canadian soldiers have died in wars, including 157 in Afghanistan and 121 on Peacekeeping missions. It seems that even peace comes at a cost.

In Psalm 37, King David tells others not to be worried about the activities of evil people because he knows God will conquer. He says the evil people will get their punishment in the end. He tells us to trust in the LORD, seek God’s wisdom, look out for others, and enjoy what blessings we have been given. He said peace would come. Peace because there will be no more wars, no fighting against ourselves, and no fighting between humanity and God. Peace that comes because the evil influences will be defeated by God.

Armies can cause havoc, but we must remember there is an enemy seeking to interfere with our freedoms and destroy our eternity. It is an evil that the might of all the armies on the earth can never conquer. Scripture shares, “For our struggle is not against flesh and blood, but against the rulers, against the authorities, against the powers of this dark world and the spiritual forces of evil in the heavenly realms” Ephesians 6: 12. It is an enemy that only God can defeat.

Jesus went to the cross to defeat the hold Satan and his minions have had on humanity. He died to liberate everyone from the ego-based mindset that separates us from God. It is a mindset that affects our faith in God’s power and authority over the physical, emotional and even the financial aspects of our lives. Only the sacrifice of Jesus could free us from the grip of Satan’s influence over our mindset.

His sacrifice granted us the freedom to choose victory over the oppressive and destructive nature of sin, and freedom from falling to temptation and making poor choices that destroy families, marriages, and communities.

Jesus’ sacrifice freed us from hopelessness and offered us joy, peace of mind, and eternity with Him.